Four charities from across Greater Birmingham have been hand-selected by employees at Mondelēz International sites throughout the region to each receive a donation of £5,000. 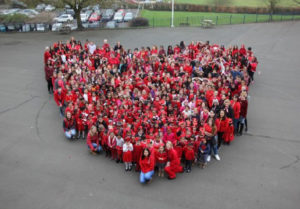 Little Hearts Matter, national disability charity Sense, St Hilda’s Scout Group and Tamworth and Lichfield Sea Cadets will be granted the considerable figure from The Cadbury Foundation, as part of its ‘Your Charity Your Choice’ scheme.

Each year, all Mondelēz International UK employees are invited to nominate wellbeing-related charities or projects close to their hearts, with the final shortlisted charities up for vote amongst fellow employees.

Little Hearts Matter is a Birmingham-based national charity and was nominated by Craig Foxall from the Bournville manufacturing site. The charity is the only one of its kind, dedicated to helping children diagnosed with only half of a working heart.

The scheme is also aimed at assisting community-focused groups – St Hilda’s Scout Group in Smethwick and Tamworth and Lichfield Sea Cadets will receive the funding to help them grow and continue to make positive changes in their local areas.

The Cadbury Foundation was set up in 1935 in recognition of Richard and George Cadbury and their investment in the welfare of their employees and the local community.

“After the great support from the hospital, we found Little Hearts Matter which continues to provide support for my daughter and family, as well as organise retreats and send care packages when the children have upcoming operations.”

Ian Carr, fundraising and marketing manager at Little Hearts Matter, said: “This money will be going towards a very special project called the Brave Heart Awards. The children we support are very rarely considered for awards simply because they cannot achieve what is expected.

“Awards for sports and attendance for example, are impossible because of physical restrictions and the fact they miss school due to ill health. The Brave Heart awards will address this and reward our children for understanding their heart.”

Terry Powell, commanding officer at Tamworth and Lichfield Sea Cadets said: “This donation will allow our volunteers to be able to deliver the best cadet experience that they can to the cadets in a safe, engaging and fun learning environment that will give them memories and friendships that will last a lifetime.”