Crisp brand Walkers is celebrating its 70th anniversary with a multi-channel campaign and limited edition flavour launch to thank the British public for their continued support. 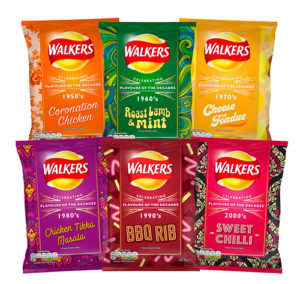 The brand has launched six limited edition flavours inspired by the nation’s favourite tastes over the decades: Coronation Chicken (1950s), Roast Lamb & Mint (1960s), Cheese Fondue (1970s), Chicken Tikka Masala (1980s), BBQ Rib (1990s) and Sweet Chili (2000s). The campaign rolled out from the 18th March with the launch of the six vintage flavours aiming to drive incremental sales and evoke a sense of fun amongst Walkers’ fans, bringing the flavours of the decades to life.

The core Walkers range will see a new design that carries the message “Celebrating 70 years of the nation’s favourite”.