Vimto making music festival a hit for thousands of retailers 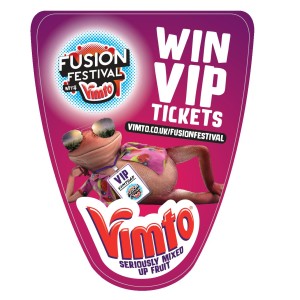 Vimto is set to launch a major promotional campaign with over 1000 retailers to support its headline sponsorship of Fusion Festival with Vimto, taking place this August.

In July, the growing soft drinks brand, which now worth £69.3m and growing five times faster than the category at +4% YOY*, will kick off activity within 1300 Londis and independent stores throughout the Midlands. The 14 week promotion will include vibrant in- store Point of Sale featuring an exclusive shopper competition to win hundreds of VIP tickets to the family music festival.

Fusion Festival with Vimto is set to attract over 50,000 festival goers from across the UK to Cofton Park in Birmingham from 28 – 30 August and features international music acts such as Justin Bieber, Labrinth and McBusted. Headline sponsorship will boost Vimto’s awareness amongst the brand’s target audience of secondary school families.  Vimto will feature on all event marketing collateral but also adding to the on-site entertainment for the fans through sampling and activation activity.

Vimto Senior Brand Manager, Vicky Marsden said: “As part of our Fusion Festival sponsorship we want to help local retailers to maximise the opportunity to profit from the increase in awareness of the Vimto brand, which has already been boosted from nationwide advertising of the festival to ensure demand is spread wider.”