After a successful career spanning some 30 years in the coffee industry, the past 15 years at Douwe Egberts and JDE Professional, segment manager Tony Smith is retiring at the end of September. 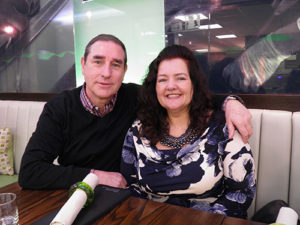 Tony Smith with his wife Carole

Apart from two years working in the retail market for Nestle Findus frozen foods, Tony developed his career mainly in the HORECA sector in both grocery wholesaler and the coffee market.

He worked for Bookers, delivered wholesale within the hotel and restaurant markets and then began his love of coffee with Matthew Algie, an independent coffee roaster based in Glasgow now owned by Tchibo.

Tony joined Douwe Egberts in 2003 as national sales manager within the independent market. He spent several years serving on the committee of the BHA, the governing body of the UK hotel and restaurant industry, on the ingredients committee and served two years as chairman which helped raise the Douwe Egbert name within the industry.

In 2009 Douwe Egberts chose to change from a direct to an indirect sales operation and created the FSD distribution partner network for Cafitesse. Following the successful transformation in 2010, Tony went on to develop a new vending business for Douwe Egberts which has grown over the years to be a key supplier to the vending industry.

He also helped shape the improvement in bean to cup coffee quality in vending over the past eight years in 2012. He worked with Crane to produce Espresso bean coffee like a bean2cup brewer. Also in 2012 he helped developed the first coffee2go pod concept to enable operators to compete with the likes of Costa Express and the High Street. Finally, he persuaded Ray McNamara of Huhtamaki to work with Crane to develop the first free standing vending machine to dispense an insulated paper cup which showcased at AVEX 2013.

Tony said he was looking forward to his retirement when he leaves JDE to peruse his many interests with his family.

His immediate plans included reducing his golf handicap and to supporting Sussex Cricket Club and Tottenham Hotspurs in the dream of sporting success in the next few years.