A total of £13,000 was raised in support of children’s charity, EdUKaid, at the ‘Great Vending Get Together Ball’. 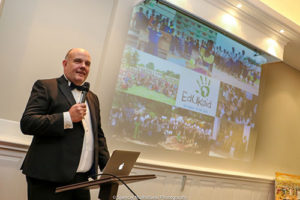 The annual event hosted by Tim and Sarah Varney from Revive Vending was held at the Haven Hotel in Sandbanks.  This was the 8th charity ball and auction in support of EdUKaid, a small charity providing much needed education to young children in one of the poorest regions in Tanzania.

The evening began with a presentation by Revive Vending’s managing firector and vhair of EdUKaid Tim Varney showing images of EdUKaid’s work in Tanzania.  Tim was able to show guests the impact the vending industry has achieved through their generosity over the past eight years including pictures of a new classroom funded through proceeds from last year’s event.

After a three-course dinner, NIVO’s managing director Graham Kingaby conducted an auction including items donated by Benders Paper Cups, Graddon Vending and Tower Leasing.  Guests were able to buy colourful balloons giving them the chance to win champagne or a souvenir from Tanzania.  Inspired by Tim’s presentation three companies pledged to sponsor pre-primary classes for the coming year providing an education nearly 500 children.  Tim was also presented with a cheque for £1,000 from NIVO and £1,300 from Automatic Vending Services – both companies have supported the charity for a number of years.

Tim said: “I am overwhelmed by the generosity of my colleagues in the industry – year after year they show incredible support for EdUKaid’s work changing the lives of some of the world’s most disadvantaged children.  This charity is very close to my and Sarah’s hearts – we have seen for ourselves the incredible impact that EdUKaid achieve and the difference that the vending industry are achieving by supporting events like this one.”

In the eight years since the event began, the vending industry has raised over £125,000 and a number of vending supporters have undertaken individual challenges in aid of the charity.  This support has dramatically improved the lives of thousands of children in one of the most remote areas of Tanzania.