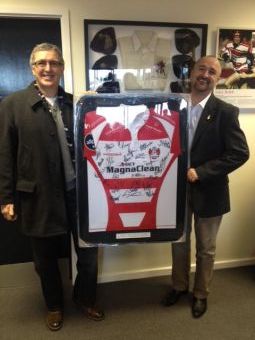 A charity which works to provide schools and education for children in Tanzania has received a boost from RPC Tedeco-Gizeh in South Wales.

The company donated a signed Gloucester Rugby shirt and match tickets to an auction at the Great Vending Get Together in Torquay – an annual ball that raises thousands of pounds towards the work of EdUKaid.

EdUKaid was founded by Tim Varney, Managing Director of Revive Vending, which supplies and services drink and snack vending machines throughout the south west of England.

The shirt and tickets were purchased by Nigel Fowler of West Country Vending who commented: ‘’I’m pleased to be able to help Tim with this very worthwhile charity. It was a great day and the only thing that would have made it better was if it had been a Bath Rugby shirt!’’

Tim Varney has been involved with EdUKaid since it started in 2003 and, although a volunteer, he is very active in the day to day running of the charity, its future direction and fundraising. He travels to Tanzania at least twice a year, where he gets the opportunity to work with EdUKaid’s local staff.

Tim commented: “I’m glad Nigel enjoyed himself and although it wasn’t a Bath shirt, he and RPC should be proud of their part in helping us raise nearly £7,000 on the evening. which will go towards EdUKaid’s work in Tanzania.