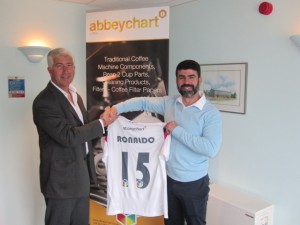 Abbeychart is pleased to announce the signing of its new international sales manager, Ronaldo Carapia.

An Italian citizen, born and raised in Brazil, Ronaldo is well travelled, and has visited 113 countries (literally covering the world corner to corner) and lived in seven countries. He speaks five languages fluently: Italian, Portuguese, French, Spanish and of course English.

Ronaldo has been in international sales for about fifteen years, working in the heavy equipment sector (tractors/bulldozers), Nutraceutical sector (vitamins/minerals/herbs), and Government (Canadian Department of International Trade). Prior to joining Abbeychart, for nine years he internationally introduced and expanded a Canadian sport sunglasses brand.

With a passion in communicating with people from all walks of life, cultures and countries, Ronaldo described his new position as an International Sales Manager for Abbeychart as a ‘dream come true’.

“With all of his many talents Ronaldo is going to be a great asset and player within the Abbeychart team,” said a company spokesperson.