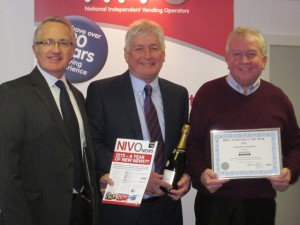 NIVO were proud to present  their 6th annual Supplier of the Year awards to the successful recipients, Crane Merchandising Systems, Automatic Retailing and Siemens Financial Services at the NIVO offices in Leeds on Thursday 29th January 2015.

The winners were once again voted for by the NIVO membership through an online survey, giving the chance for those who have provided great service and customer satisfaction to be formally acknowledged by their customers. Winners of the much envied accolade were delighted to be lavished with champagne, certificates and a full Yorkshire carvery lunch. The biggest accolade of all, however, is being recognised by the NIVO members for the outstanding work achieved by the winners throughout 2014.

The awards included the usual three categories; Equipment, Consumables and Business Service Provider. The winners in each category respectively were Crane Merchandising Systems, Automatic Retailing and Siemens Financial Services. Congratulations go to the finalists in each category who are Coffetek, 4 Aces and Vendman.

Additionally this year NIVO decided to present one of their Special Recognition Awards.  Some years, a special award is presented to a person the NIVO team believes has contributed a huge amount to the industry and to NIVO members in particular. They were delighted to award this honour for 2014 to Chris Starling of Nestlé Professional.”Congratulations again to all the worthy winners , we hope all NIVO suppliers aim to win the accolade in 2015!” said a company spokesperson.