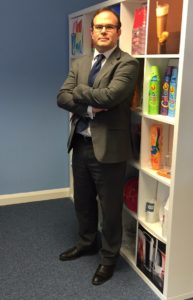 Guy Jaques has been appointed by Nupik-Flo in the position of general manager UK and Ireland. Guy’s appointment follows the recent retirement of Gabriel Escolar who initially started the business on behalf of Nupik & Flo in the UK some 27 years ago.

Nupik-Flo is a European leader in the manufacture of vending and catering disposables, manufacturing in excess of 4 billion vending cups, and has built up a strong and diverse client base who rely upon their products within the UK market. Not new to Nupik-Flo, Guy has worked as sales and marketing manager for the business and is known by many within the vending and catering industries.

Guy commented “It’s an honour to be appointed in to this role and I very much hope to lead Nupik-Flo to continued success and growth within the vending and catering markets. The role is a natural progression. We have a strong proposition even during tougher trading conditions and hope that with new investment and appointments to follow that we’ll go from strength to strength.”