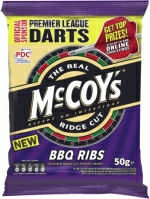 McCoy’s has embarked on a deal as the title sponsor of the McCoy’s Premier League Darts. The tournament sees the world’s top eight players – including the legendary Phil ‘The Power’ Taylor, reigning Premier League Darts champion Gary Anderson and PDC World Champion Adrian Lewis – play each other over 15 weeks across the UK, including the Play-Offs in front of a packed house at The O2 in London.

Additionally, McCoy’s will be a partner sponsor for all the other events under the PDC banner.

From February, McCoy’s will be announcing the sponsorship via an on-pack promotion that will encourage consumers to go online to the McCoy’s website to be in with the chance of winning VIP tickets to the McCoy’s Premier League Darts Play-Offs by participating in the McCoy’s darts challenge.

Competing to Win
‘Cock!’ According to Vendman’s Rob Little, ‘James May knows nothing about vending.’