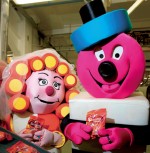 Cadbury has just launched Bassetts Red Liquorice Allsorts, which will include the introduction of a new character on-pack, called Betty.

The packaging of the new version is also red, reflecting the contents and creating instant differentiation from the standard packs, and the new product includes a Red Liquorice Betty sweet, as a fun tribute to the new character.

The launch of Bassetts Red Liquorice Allsorts will be supported by press advertising, PR and digital activity to create excitement around the introduction of Betty.  The campaign will also include nationwide sampling and dedicated POB material.

Kate Harding, Trade Communications Manager at Cadbury, comments: “Liquorice is a category experiencing 4.6 per cent growth, and worth over £50m in retail sales value1. We know from research that the word ‘Allsorts’ resonates liquorice, therefore we want to make the most of this opportunity by launching a red liquorice SKU to complement Bassetts Liquorice Allsorts, offering consumers more choice in this growing category”.

More news from Cadbury. The company has been awarded an accolade for the recently re-introduced chocolate favourite, Cadbury Wispa, named ‘Product of the Year’ within the Confectionery category2.

Wispa returned by popular demand in October 2008, since when 41.4 million bars have been sold to consumers3 and the brand is currently worth £21m, with over 215,000 Facebook fans.

Product of the Year is the UK’s leading survey into consumer product innovation, with over 12,000 consumers voting for the nation’s latest ‘must have’ products. The award means that Cadbury can display the red ‘Product of the Year’ symbol on all Wispa communications and packaging, which will prove beneficial to operators, as research has shown that almost 50 per cent of consumers see this symbol as a positive incentive to buy a product4.