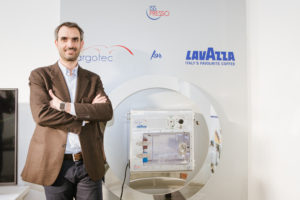 Marco Lavazza with the ISSpresso

Lavazza’s innovative ISSpresso machine was installed in the Space Station’s Node 1/Unity module on May 3, 2015 allowing European Space Agency astronaut Samantha Cristoforetti to become the first to drink espresso in a state of microgravity in history

And now, the machine has welcomed the VITA space mission crew, led by Paolo Nespoli.

The machine was created by Argotec and Lavazza in a public-private partnership with the Italian Space Agency.

The partnership with ASI, which co-ordinated the experiment, made possible the machine’s transport to the International Space Station and, subsequently, thanks to an agreement made with NASA, the agency was able to secure ISSpresso’s permanent stay in orbit.

After 27 months in space at 400km above the Earth, the ISSpresso machine will allow yet another Italian astronaut to enjoy a perfect artisanal espresso in space, just like at home. The aroma is the same, thanks to the delicate, balanced flavour provided by the Lavazza capsules: the crema and coffee are not mixed, as they are on Earth, but instead are separate, and furthermore, the traditional espresso cup is replaced by a special pouch to drink from.

ISSpresso can make coffee in extreme conditions, where the principles of fluid differ completely from those on Earth. However, the preparation process is the same: the utmost practicality and simplicity for espresso, this time to be enjoyed through a straw. ISSpresso meets very stringent compatibility requirements set forth by NASA for the systems already present onboard, along with those which astronauts interact with. The machine also has an innovative device that allows the coffee dispensing line to be cleaned.

335 exhibitors now confirmed for sold out lunch! at ExCeL
The new £10 note to land in September