Has the office become the new coffee shop? 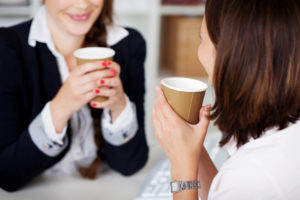 The Office Coffee Company has published the results of a survey that show that the office could soon become the new coffee shop.

The UK’s coffee addiction is growing, with 70 million cups being consumed every year, and now the coffee shop could now be taking a hit as employers step up their game to provide delicious, rich coffee at the push of a button.

According the results of the survey, more than half of employees now have access to a machine to serve up their own fresh coffee. And of those that don’t, over 90% say they think their colleagues would enjoy the use of one if it was provided. The increasing number of coffee machines readily accessible in the office means workers are less likely to head out to get their caffeine fix, instead simply choosing to head to the staff room to grab a cup of fresh coffee.

Price also plays a part in the decision not to leave the office as the cost of a daily cuppa from a high street chain can quickly mount up.

However, there is still room for employees to improve their offering. Some 28% of employees revealed they aren’t happy with their workplace’s provision of drinks, indicating that with some small adjustments employers can boost morale. For employers that want to deliver, coffee is the way to go, being the preferred hot drink option of two thirds of survey participants, beating out the previous staple of tea.

The Office Coffee Company’s survey was conducted to coincide with UK Coffee Week (April 10 to 16).