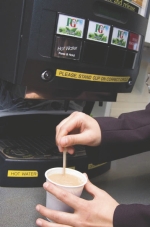 In February last year, research published by the Tea Advisory Panel revealed that the caffeine consumed by typical tea-drinkers actually benefits the mind and the body. The study, published in the March 2009 issue of the British Foundation’s Nutrition Bulletin, showed that the caffeine obtained from the equivalent of one to eight cups of tea per day can improve alertness, short-term recall and reaction time, better mood and reduce levels of fatigue. In addition, the benefits of consuming modest amounts of caffeine, such as those present in tea, begin with the first cup of the day.

The study analysed 41 double-blind, placebo-controlled trials on caffeine consumption published over the past 15 years.

Author Dr Carrie Ruxton, an independent nutritionist, said that the study provided further evidence that moderate caffeine sources, such as tea, offer cognitive and performance-related benefits. Caffeine is believed to impact on mood and performance by acting on neurotransmitters in the brain.

“Most of the studies supported the idea that taking in modest levels of caffeine everyday makes us more alert, boosts short-term memory and improves reaction time,” said Dr Ruxton. “There were also consistent findings that caffeine consumption is linked to a positive mood and less feelings of fatigue.”

The level of caffeine intake at which cognitive effects were generated was fairly low – one study showed a beneficial effect from the equivalent of just one-third of a cup of tea.

Dr Ruxton concluded: “There is no evidence that low to moderate intakes of caffeine, even when consumed around extreme exercise, have a negative effect on hydration.

“The range of caffeine intake that could maximise benefit in relation to mood, cognitive function, performance and hydration would equate to between 1 and 8 cups of tea per day, and any risk of dehydration from this level of intake would be minimal,” she said.

The hydrating benefits of tea

On the 17th June this year, an important new clinical study commissioned by the Tea Advisory Service (TAP) took this research one step further and discovered that four mugs of tea a day were found to be just as hydrating as water – with no negative effects. The researchers concluded that tea can make a valid contribution to daily fluid requirements.

Dr Carrie Ruxton, author of the clinical study said: “It’s a common misconception that drinking tea can increase the risk of dehydration because of the caffeine content. But this new study proves that there is absolutely no truth behind the theory. Drinking moderate amounts of tea – four mugs a day – offered the same excellent hydration qualities as plain water. There were no statistical differences between regular tea and water when a wide range of blood and urine markers for hydration were tested among the volunteers. In addition, urine volume was similar after tea or water, confirming that we do not urinate more after drinking tea.

“This study shows that tea is an excellent way to keep hydration levels topped up throughout the day. Not only is a mug of tea refreshing and delicious, it can be an important part of maintaining proper hydration.”

Dr Catherine Hood from TAP added: “It’s vital that everyone keeps their fluid levels topped up to avoid dehydration – proper hydration is key to good mental and physical health. Tea drinkers can be reassured that their favourite cuppa can count towards their fluid intake without the risk of dehydration.

“A growing number of scientific studies have demonstrated just how useful tea can be in keeping the body in good condition thanks to its high polyphenol content which gives tea its characteristic colour. Tea polyphenols not only have antioxidant effects but help maintain normal vascular function. This is why many studies have linked regular tea consumption with a lower risk of heart disease and stroke.

“There has been some debate over whether tea retains its healthy properties if drunk with milk, but again studies have shown that the positive effects of tea are just the same whether or not milk is used.

“The findings of this latest research agree with previous studies on caffeine pills and normal caffeinated drinks which demonstrated no adverse effects on hydration when a moderate caffeine intake (114-420mg/d) is consumed. Caffeine levels were not measured in the current study but would have been in the region of 200mg per day.”

In 2006, an article in The Daily Mail said that drinking four or more cups of tea could be more beneficial than drinking water. Highlighting the various health benefits associated with drinking tea, it pointed to a group of antioxidants called flavonoids which help to prevent cell damage. “Tea is a natural source of flavonoids – there is eight times the antioxidant capacity of one apple in just three cups of tea,” it said.

On this occasion, Dr Catherine Ruxton told The Mail: “Tea is in fact rehydrating, not dehydrating. Add to this the overwhelming evidence that drinking tea every day can be beneficial to heart health, and you could argue that drinking tea is actually better for you than drinking water. Our bodies need antioxidants to help fight off the attack by free radicals and tea provides the most abundant source in the UK diet. You don’t find these antioxidants in water alone. We should also consider the positive benefits that drinking tea has on hydrating Britons – many of whom are elderly and don’t drink water.”

Tea is derived from the leaves of the Camellia Sinensis plant and originates in South East Asia, specifically in north Burma and the Chinese provinces of Yunnan and Sichuan. The importation of tea to Britain began in the 1660s, brought to our shores by the British East India Company. First appearing in pharmacies as a medicinal beverage, it was being consumed by the upper echelons of English society by the end of that century, before hitting the mass market and becoming the national beverage by 1750. The ascent of tea sales within the market was matched by those of cane sugar, as the British sweetened the drink to make it more palatable.

Despite its humble beginnings as a medicinal drink, consumed almost exclusively in China and South East Asia, tea has become the most widely consumed beverage in the world, second only to water. In addition to the four main types of tea on the marketplace – black, green, white and oolong – countless fruit and herbal varieties can be found where the tea leaves are combined and infused with other plant, flower and fruit extracts.

In the early days of vending, the tea was often watery and grey, making it a last resort for the consumer. Thankfully, we have come a long way since then and vended tea now tastes just as good as you can make it at home. Imporient, for example, exports millions of kilos of tea world-wide each year and all its blends are made from main grade black leaf tea; the company guarantees not to use secondary grade powdery dusts or brown stalk to reduces costs. Imporient is also Fairtrade certified, a major plus in a what is now an ethic
ally driven market.

Of the 150 million cups of tea that are consumed a day, many of these will be from the venders that line our work cafeterias, schools, gyms and other communal areas. As people lead increasingly fast paced lives they want convenience and health in one product. Tea does just that; well known for its benefits to health it is also low-cost and affordable. Its inclusion in vending means that, when the end user is stressed, tired, and in need of that vital pick-me-up to see them through the afternoon, they can now look forward to a great cup of tea.