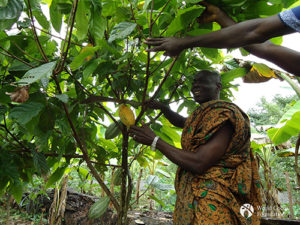 Central to the Frameworks is a commitment to no further conversion of any forest land for cocoa production.  The companies and governments pledged to eliminate illegal cocoa production in national parks, in line with stronger enforcement of national forest policies and development of alternative livelihoods for affected farmers. The two countries produce nearly two-thirds of the world’s annual supply of cocoa, the main ingredient in chocolate and a range of other consumer products.

The two governments and companies have agreed through the Frameworks to accelerate investment in long-term sustainable production of cocoa, with an emphasis on “growing more cocoa on less land”.

World Cocoa Foundation chairman Barry Parkin said: “These comprehensive Frameworks for Action are important landmarks as they spell out a series of steps by both governments and industry to stop deforestation in cocoa-growing areas. In making good on these commitments, the public and private sectors will be partnering on actions that result in cocoa becoming a serious agroforestry crop, where different trees and crops co-exist on the same land and previously deforested land is being rehabilitated. This approach could serve as a model for other commodities.”

John Church, chief supply chain officer, General Mills said: “Deforestation is a significant challenge, but by aligning and working together, we can help put a stop to it and positively impact climate change by rehabilitating the land. We also recognise there are systemic labor issues in the cocoa supply chain, and we understand it will take industry-wide collaboration to make improvements. Having the national and local governments, who are key to addressing the issues, at the table from the beginning is key.”

Antoine de Saint-Affrique, chief executive officer, Barry Callebaut said: “Eliminating deforestation from the cocoa supply chain requires a joint action of government, NGOs and industry to tackle its root causes, be it cocoa farmer poverty, climate change or pollution. These Frameworks for Action are a great step forward and give confidence that we will rapidly see measurable progress on the ground.”