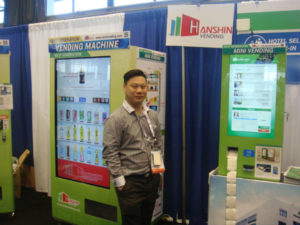 Aiming to promote international trade, technology exchanges and cooperation between the Chinese and international vending manufacturers and operators, the China International Vending & OCS Showcase 2016 will be held in Beijing at the China International Exhibition Center on 16-18 November 2016. The show is co-located with ANUFOOD China 2016, the largest food trade fair in northern China, which attracts 25,000+ visitors from home and abroad each year.

), Spanish Vending Association (ANEDA) and many other international vending associations and media around the world.

Formerly the China Vending Show, the exhibition was launched in 2003, and has built on its ten years of experience to promote international participation, creative innovation, and international trade.

In order to encourage more international companies to exhibit at the China Vending Showcase, the organizers will provide international exhibitors with the most competitive exhibition space rates and premium booth furniture packages. 5000+ professional buyers and vending operators will be officially invited from home and abroad to make trade negotiations and place purchase orders at the show.

The steady growth of China’s economy means that the Chinese vending & OCS industry is entering a new era of robust development. It is confidently predicted that China will become one of the largest vending and OCS markets, next to USA, Japan and the European developed countries in the next 3-5 years.