From this month, workers and visitors to Canary Wharf will be able to top up their water bottles on the go, thanks to seven new water refill stations being installed in Canary Wharf’s shopping malls.  The first is now in action in Canada Place, with the second arriving in Cabot Place by the end of this week and the remaining five to be installed from the beginning of September in Jubilee Place, Churchill Place and Crossrail Place. 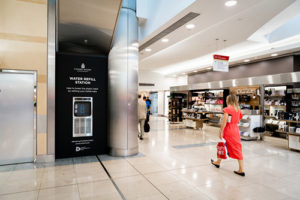 The move is part of Canary Wharf Group’s ongoing commitment to sustainability and the latest initiative in their #BreakingThePlasticHabit campaign, which last week saw the Estate set to become a plastic-free commercial community, an initiative from Surfers Against Sewage.

Some of the worrying statistics about plastic bottles include:

Steve Greig, co-managing director, Canary Wharf Management, said: “After making Canary Wharf a clean coffee zone, tackling plastic straws, introducing a Deposit Return Scheme and set to become a plastic free commercial centre, this is a natural next step for us.  We hope this helps even more people make the switch to carrying a reusable bottle.  When you have an opportunity to save cost and the planet it’s an easy decision to make.”

Mike Winter, managing director of MIW Water Cooler Experts said: “Responsible organisations like Canary Wharf Group are showing that where there’s a will there’s a way to tackle the scourge of plastic bottles.  The solution is as simple as it was in Victorian times, when you’d find a drinking fountain on every street corner.  The difference now is that the latest models of outdoor fountains are tougher, safer and more accessible than ever before.  This will be the first time fountains which can track usage are installed in UK shopping malls, so it will be exciting to see how many single-use water bottles we are able to replace with refills.”