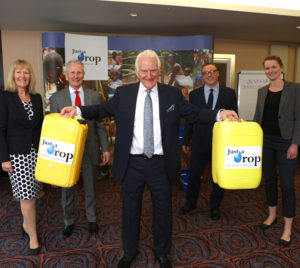 Earlier this year The British Water Cooler Association launched its ‘5 for 5 Pledge’, with one of the pledges asking member companies to seek ways of being being more socially sustainable by supporting industry-wide and local community corporate social responsibility schemes involving staff and the wider community.

The membership responded with enthusiasm.

In addition to already raising the funds for two projects run by the charity Just a Drop, the BWCA’s chosen charity, three member companies are organising fundraising efforts to raise additional funds for the BWCA projects, with two other companies supporting Just a Drop directly.

Phillipa Atkinson-Clow, the BWCA general manager who is co-ordinating the fund-raising efforts, said: “You could say our members are fit for purpose. We have one person running a marathon; two companies jointly organising a triathlon team; and another gathering seven colleagues to undertake the Three Peaks Challenge. We are exceedingly proud of them and so grateful to all involved for giving up so much of their own time to train for these challenges in order to support Just a Drop. When we announced our 5 for 5 Pledge we didn’t expect the reaction to be so impressive. Our thanks to everyone involved.”

Eight members of the Ebac team are planning to climb the tallest peaks in the United Kingdom: Ben Nevis in Scotland, Scafell in England and Snowdon in Wales. In addition, Laura Newby and Tony Hird, who both work on business development at Ebac, are supporting the climbers by helping to raise funds for Just a Drop and also for Cancer Research.  Ebac is based in Newton Aycliffe.

Three BWCA members are taking part in the world’s largest triathlon.  Paul Goad, MD of Seaton Spring; Chris Penn, MD of 4 Aces and Richard Allen, a consultant are competing on  July 22 in London to raise money for Just a Drop. The team are splitting the workload; Mr Penn will swim 1,500m, Mr Allen will cycle 40k and Mr Goad will run 10k.  Seaton Spring is based in Seaham and 4 Aces in Harlow.

Roger Moore, distribution director of Blantyre-based Eden Springs completed the 2017 Stirling Marathon on  May 21 raising a fantastic £1,430 which exceed his target by over 280%.

There is still time to support this effort by clicking here.

Chairman John Dundon said: “The level of effort, imagination and generosity demonstrated by our Members impresses me but doesn’t surprise me. This is an industry that seems to attract people who are enthusiastic, empathetic and determined, not just in their working lives but in all that they do. We thank them, on behalf of Just a Drop, for their superb efforts.”