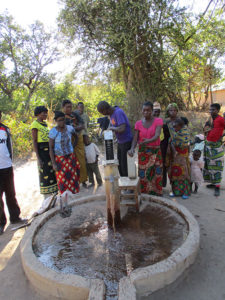 One of the existing boreholes sponsored by BWCA

The BWCA launched a charity partnership with Just a Drop www.justadrop.org in March 2016, since when over £40,000 has been raised.

This was the first time the Golf Day, previously held as part of the annual conference, had been staged as a separate event and designed as a Charity Golf Day. It was held at The Oxfordshire Golf Course in the Chilterns and organised by the BWCA’s deputy chairman, Peter Brooks.

The fundraising effort was supported by all the entrants but the success was largely due to the generosity of an array of sponsors. Golfers also gave generously to play the after-dinner game of “Heads & Tails”, raising nearly £500.

Peter said: “I must thank the sponsors and the players for entering into the spirit of the event with such enthusiasm for the game and with such generosity for the charity. We are proud to have been able to provide the final tranche of money for this, our 4th borehole.”

Phillipa Atkinson-Clow, general manager, said: “Just a Drop provides drinking water and sanitation to communities in developing countries.  The BWCA and its Executive Council chose to raise funds for a number of villages in Zambia.  The projects provide clean drinking water to villages whose inhabitants had no access to clean safe water. The generosity of our members means that those living in these villages not only can avoid waterborne diseases but that children can go to school and women can take up gainful employment instead of having to walk miles to what were often unclean water sources to fetch drinking water.”