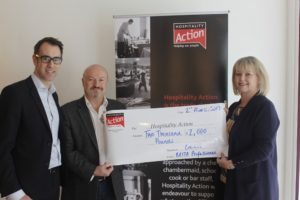 The challenge, which was kick started by National Chef of the Year 2013, Hayden Groves, saw 100 people take part raising a grand total of £1,000, which was then doubled by BRITA Professional. Participants were challenged to see how far they could cycle in 180 seconds – the average time it takes to exchange the new PURITY C Steam cartridge, and a nod to HA’s 180th anniversary.

The three minute race against the clock drew in huge crowds at the show, with many keen to beat Hayden’s benchmark distance including a number of esteemed chefs such as Matt Healey, finalist of MasterChef Professional 2016, and Cyrus Todiwala.

At the end of the event, it was Richard Vanstone, sales controller, Neville UK who raced to victory with an impressive 1.3 miles cycled in 180 seconds. Richard receives £250 worth of vouchers for a Michelin-starred restaurant of his choice.

Penny Moore, chief executive of Hospitality Action, said of the challenge: “We are delighted that BRITA chose to support our charity in this way, and are very grateful to everyone who took part in the PURITY C Steam Cycling Challenge. The money raised will go directly towards helping those in our industry who have fallen on hard times and really will make an enormous impact on our beneficiaries’ lives.”

Glenn Roberts, sales director, BRITA Professional comments: “We’d like to thank everyone who took part in our PURITY C Steam cycling challenge at the Great Hospitality Show. Thanks to everyone’s competitive spirit, the fundraising competition was a huge success. The 180-second cycle demonstrated perfectly just how quick it is to change our new PURITY C Steam filter. But most importantly we’re thrilled to have raised so much money for Hospitality Action and to have joined them in celebrating 180 years as the industry’s leading charity.”