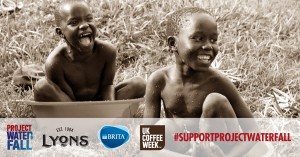 On the 14 April, the Thunderclap will simultaneously send out a message of support for the charity on the social media channels of those who joined the campaign. The Thunderclap will harness the power of social media to get the industry and consumers talking about the cause. It will include a call to action to support the charity and raise funds by buying a coffee in one of thousands of participating UK Coffee Week outlets during the week.

Miles Dawson, sales director, BRITA Professional commented: “By backing our Thunderclap campaign you will help make a difference by spreading the message and increasing awareness of the vital work the charity undertakes as well as helping to raise much needed funds. Nobody should be without the right to access clean, safe water.”

Nicole Hartnell, brand manager, Lyons added: “Our Thunderclap is targeted at everyone passionate about coffee, from across the industry to those sitting in the comfort of their own home. You can also help to raise funds by buying a coffee at a participating outlet during UK Coffee Week.”

To sign up to the Thunderclap visit: http://thndr.me/VreaYY then press ‘support’ before midday on 14 April.

“The problem with coffee cup recycling is at the beginning, not at the end.”
Barry Callebaut’s ‘educated’ choice of drinks proves popular for GEM Vending