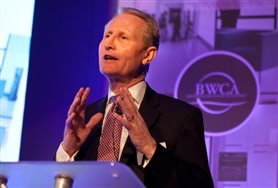 The growth in the water cooler market has continued and improved still further, delegates at the British Water Cooler Association annual conference heard.

In an upbeat presentation from Amy Lathrop Visser, Senior Market Consultant from Zenith International Ltd, the data from 2014 showed what Ms Visser describes as “a turning point in the market dynamics.” She said: “For the first time, Bottled Water Coolers (BWC) gained against POU units.”

The combined POU and BWC market rose in value by 8% compared with 2013, continuing a growth trend reported last year for the first time since 2007. The market is now worth £121 million compared with £112million in 2013.

The recovering economy, with a number of start-up companies and improved employment, has buoyed the market and Zenith International predicts that POU (point of use or mains fed coolers) and BWC (bottled water coolers) will be ‘neck-and-neck for the next 4 to 5 years’. The market share between the two types of coolers remains stable, however, with POU standing at 51% and BWC at 49% of the total in terms of the number of units.

Amy Lathrop Visser explains: “This is the result of the intense price competition in the POU segment, which has squeezed the overall revenue as well as the profit margins.”

POU distribution outlets were revealed in the data with offices, unsurprisingly, taking nearly two thirds (64%) of the entire POU cooler market. Institutions were the second largest single category with 20% share. HORECA stood at 7% and factories at 6%.

Amy Lathrop Visser said: “The continuing trend towards health and well-being, the recovery of the economy, the growth of the start-up business market and currency fluctuations were all contributors to this very positive picture for the industry in 2014. It seems that Bottled Water Coolers have bounced back and this is a trend we expect to continue. Small and start-up businesses in particular find Bottled Water Coolers a healthy, flexible and convenient choice.” The areas that are ripe for further growth are the construction and office sectors, according to Zenith.

BWCA Chairman John Dundon welcomed the news: “This is a buoyant market and Zenith’s market intelligence has confirmed what those of us who run and work in cooler businesses have been experiencing. The BWCA is similarly growing, with a number of new members joining in recent weeks and months, and all this contributes not just to market growth but to our interest in making this sector as professional as it can be. BWCA members are rigorously trained and audited for best practice and our members have the edge over others when it comes to offering customers consistent service, hygiene and safety as well as value.”

He added: “The BWCA conference and trade show was held at the Nottingham Belfry on 19th March 2015. Other speakers were John Dundon and Alastair Campbell.ed: “We thank Amy Lathrop Visser and her team for delivering this data to the BWCA conference in Nottingham. We are immensely grateful to her.”