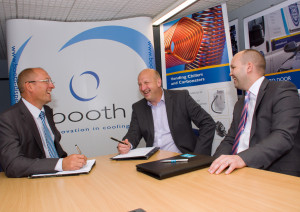 Booth Dispensers, a Blackpool-based designer and manufacturer of equipment for dispensing cold drinks, has purchased its rented premises with funding from Yorkshire Bank.

The company chose to buy the premises it has rented for nine years to have more control over the running of the building, allowing management to carry out improvements. It has seen significant growth in the last year with the workforce increasing by ten percent and turnover by 15%. The six-figure funding package from Yorkshire Bank brings its total investment in the business to £2m since they began working together in 2009.

The 50-year-old firm employs approximately 110 people from its site in Blackpool and exports to Europe, Australia and the USA.

Phil Elliott, managing director of Booth Dispensers, joined the business in 1996 as sales manager and moved to his current role in 1999. In 2000 he led a successful management buyout and believes the firm has significantly changed direction since then. He commented: “Before the MBO, the business predominantly catered to the vending machine sector.  Afterwards, we started targeting new markets, and now supply equipment to major breweries. Our customer base has changed to comprise of about 60% breweries and 40% vending machine businesses.”

Phil expects growth to continue consistently with turnover forecast to rise by 15-20% over the next 12 months and staff numbers by 10% again. He added: “Yorkshire Bank has been very supportive of our ambitions, providing a number of facilities to help us reach them. We have a very positive relationship with our manager, Andy Nurse, who is always keen to listen to our ideas.”

Andy Nurse, relationship manager at Yorkshire Bank’s Business and Private Banking Centre in Preston, said: “Booth Dispensers is a great example of a local business successfully targeting domestic and international markets, leading to strong growth. Phil went from joining the business in 1996 to owning it just a few years later, and has now steered it to become a major player in the brewery supply chain. We are delighted to have been a

Yorkshire Bank recently launched a series of lending initiatives for UK businesses, designed to encourage growth for new and existing customers. As well as capital-free periods for up to five years, the Bank has also introduced high percentage funding for businesses to purchase trading premises. Yorkshire Bank has also strengthened its support for UK SMEs by becoming the first to partner with the British Business Bank under its ENABLE Guarantees scheme. Up to £125m of new lending by Yorkshire Bank will help more small businesses achieve their growth ambitions.ble to support the business’ development. As economic conditions continue to improve, Yorkshire Bank remains focused on supporting the growth ambitions of businesses across the North West.”