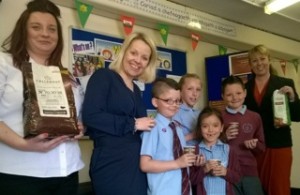 With the ebola crisis continuing to impact on the villages of West and Central Africa, Barry Callebaut Beverages UK has been educating local primary children about what’s going on in the regions where the cocoa beans grow, while also raising funds to support the Oxfam ebola crisis appeal.
Last week, representatives from the quality hot drinks manufacturer went into Shotton’s Venerable Edward Morgan Catholic Primary School to sell cups of its finest hot chocolate to raise money for the Oxfam appeal. The sale of the chocolate followed on from a presentation to the school assembly by head of sales for Barry Callebaut Beverages UK, Paula Bentley.
Paula says: “We were keen to give the children some background on where their chocolate comes from and to give them an idea of the conditions that the African workers face. We also wanted to educate them on the importance of supporting the villagers and helping in the fight against ebola.
“The demand for chocolate will soon outweigh the supply as the West and the richer Asian countries are consuming it in increasing quantities. Supporting the people who work to bring us this chocolate is a sustainable issue as well as a humanitarian one. If we don’t help the people in these regions, cocoa will run out in the next five years. The children appreciated these larger issues and we have managed to give Oxfam’s appeal fund a good boost as a result.”
Head teacher of Venerable Edward Morgan Catholic Primary School, Mrs Langley adds: “It was a pleasure to join forces with Barry Callebaut in raising some money for Oxfam. The assembly that Paula presented was excellent and enjoyed by all ages from three years and up.

“It was nice to see the children so engaged. It’s great to give them such background and to encourage them to be aware of how we come by food and treat items, particularly so soon after Easter.”