A triumph for the industry

Vending International > Industry Events > A triumph for the industry

Designed to reward the people, products and services that make the vending and water industries a success, the 2018 Vendies took place this month at the Forest of Arden Hotel & Country Club, Birmingham. 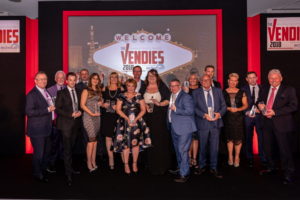 This year’s event began back in May with the entry and nomination stage, when the industry was invited to put forward its most outstanding brands, products, people and services for consideration.

An expert judging panel, comprising leading names from across the water and vending industry then decided on the finalists, before asking the industry to vote in the majority of categories.

And just to add to the excitement, guests were asked to vote live in the Best New Product category with the ‘on the night vote’ added to the existing one to get the winner, later revealed as Burts Jim Beam Original BBQ Crisps by Burts Chips.

Guests were treated to a fantastic drinks reception, three course meal and entertainment from Canadian comic Sean Collins before the award presentations began in earnest.

First up was the manufacturer suppliers and Best Machine Innovation, sponsored by Lavazza, with the Novara Protein Shake Solution from Coffetek Azkoyen taking the top spot.

Best Supplier Website went to Westomatic & WestoNET, while SB Software emerged victorious in not one, but two categories – Best Customer Service for its Client Support Team  and Best Ancillary Product or Service for Vendmanager.

Next up was the Water categories and the Customer Service Award, sponsored by the EDWCA which saw Divine Water’s Aftersales & Delivery Drivers being recognised for their outstanding work and commitment.

The final award in the water categories, the Outstanding Contribution Award went to Tracy Corroll of the EDWCA for her tireless work in the industry.

The final award of the evening, the Lifetime Achievement Award was presented by the managing director of NIVO, Graham Kingaby to Steve Gallagher of GEM Vending to a standing ovation.

A charity raffle was held in aid of Alexander Devine Children’s Hospice, with Luke Enticknap of Express Vending winning a £1200 Trailfinders voucher to book tickets to Las Vegas or a destination of his choice, sponsored by Siemens. Details of the amount raised will be announced shortly.