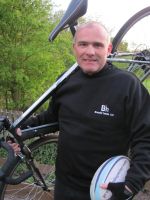 Neil Robson who works as Logistics operations manager for vending services company Brands 2hands (B2h) of Leicestershire and has coached at Ashby Junior Rugby Club for over 6 years. With rugby friends Chris Ratcliffe, Steve Jennings and Terry Huxley teamed up to complete their 700 mile mammoth sponsored cycle ride in aid of the Matt Hampson charity (www.matthampsonfoundation.org), which support seriously injured sports people & Ashby RFC Junior team who aim to tour in Europe in 2015.

The aim to visit all 12 Premier Rugby grounds in England from Sharks ground in Sale, Manchester, to the home of local heroes Leicester Tigers and rivals Northampton Saints, onto Worcester Warriors, Gloucester and Bath Rugby Clubs, across country to the Exeter Chiefs, London Irish at Reading, London Welsh at Oxford, Wasps in High Wycombe and Saracens in Barnet late on Friday night.  On Saturday they completed their marathon to Harlequins and finally RFU Headquarters Twickenham where they enjoyed the Championship Grand Final between East Midlands rivals Tigers & Saints.

Leicester Tigers players had been particularly supportive in tweeting messages throughout the week; Neil, Terry & Chris met the players after the final and were able to pass on their gratitude. Leicester coach Richard Cockerill praised the efforts they made in support of the charity, each beneficiary will receive approx £6000.