Addressing customer feedback after the successful launch of its first ever festive cup last year, 4 Aces has extended its range of the ‘Jumpacup’ to include double wall 8 oz and 12 oz cups, along with PLA versions of the same. 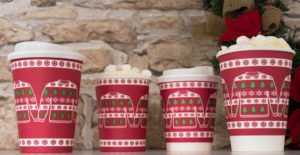 The non-branded cup has proven popular thanks to its theme of ‘coming together’. A colourful design depicting a row of festive jumpers, their sleeves touching as if they are joining hands, the Jumpacup was initially launched as a single wall cup in a bid to test the market.

4 Aces had previously created tailored cups for key customers to mark that special, celebratory time of year but wanted to introduce a generic festive cup in order to reach the widest audience and explore demand.

The packaging specialist has since been keen to expand its popular lines with PLA versions of the same. Demand is being driven for these sustainable, compostable alternatives by the end-users, who are now a lot more savvy about disposables and the effect they may have on the environment, overall.

David Blake, sales director of 4 Aces explains: “It’s important to us that we offer our customers the widest choice and this includes novelty and festive items that may have previously been limited in terms of the selection, particularly for what are deemed greener versions.

“Demand for printed items has risen considerably in recent years and we’ve been keen to play a part in this and to experiment with our own designs. We’re just delighted that the initial launch of the Jumpacup met with such a warm reception. “Our intention was to create a universal design that could be used in all environments and by a wide range of customers. Most people are keen to embrace the spirit of the season and it’s nice to give them that option.”